The Greatest Democracy on Earth 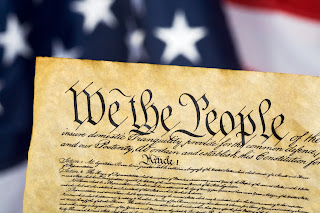 Americans boast about their democracy. They have built up a formidable military machine in order to force our electoral system on other countries such as Iraq or Afghanistan.
But holding regular elections does not make a country democratic. In recent months Turkey and Egypt and other countries, for instance Russia, have held elections but not before making sure that no serious challengers would be able to run against the existing government.
Now we don't do that. In spite of all the talk about putting Hillary Clinton in prison, no one has tried to do that. But we have other ways of controlling who runs for president. The moneyed people refuse to finance third parties. You don't have to jail people to keep them off the ballot.
There is another reason for denying that electoral systems are, of course, democratic. Elections are not an end in themselves. They are one part of the democratic process by which a people manages its own affairs. In a democracy the people govern themselves. They decide who will be in the government and, More importantly, what policies the government will follow. Holding regular elections, even if they are squeaky clean, does not suffice to empower the people at large run their own lives.
If the people are going to be self determining, they need to decide together what policies to follow. They need therefore to consult with each other and try as hard as possible to reach compromises, to establish shared principles, or even to disagree on principles but work together on concrete projects. But the basic goal must always be to reach consensus as far as possible on what we all think is best for all of us.
Our political life today is very different. We have two political parties, both financed by the super rich and they struggle with each other for votes. The goal of the democratic process is not to come together around policies we think will benefit all of us. The goal of our electoral system is to allow some people to make other people do what they don't want to do. The Democrats passed Obama care. The Republicans try to dismantle it. The Democratic administration try to reduce pollution from automobiles and power plants. The Republican administration drops all those regulation and gives free reign to polluters. The Democratic administration wanted to give young people brought here as children a chance to become educated citizens. The Republican administration treats all immigrants, with papers or without, as rapists and murderers.
Neither party is interested in popular self-government. Instead they mislead, misinform and lie to the people at large. The people cannot make reasonable decisions because they are ill informed.
Politicians have two goals: they try to raise money for their campaigns and they try to get as many votes as possible. They are not particularly interested in what is good for the people they supposedly represent. They are not interested in popular self-government; they want to be re-elected. They are not interested in democracy, but in an electoral system that pretends to be democratic but is not. There are many examples of their indifference to the well being of the majority of Americans:
The economy is said to be in excellent shape but significant numbers of Americans are poor or are barely getting by, living paycheck to paycheck, unable to save for their old age or unable to pay for education for themselves or their children. A half million Americans are homeless; 25% of those were children. When he was campaigning for president, Sen. McCain when asked how many houses he owned, could not remember whether it was eight or nine. He did not offer any of the two house his homeless fellow citizens. Health care for the poor is precarious and becoming more so every day.
Racial problems beset this republic abetted by an administration that caters to primitive racism among whites. The disproportionate number of people of color in prison, the serious health problems of persons of color, and the second-rate education given to many children of color are of no concern to the current government. They gain votes by being racist and that's all they care about.
Americans die every day of opioid overdoses. There is a great deal of hand wringing about that among politicians. But so far we have seen no action, no plans to improve treatment of addicts, to study problems of addiction. The problem is not really on the political agenda.
The environmental crisis becomes more acute and threatening every day. Our government blandly denies the facts of harsher climate events, rising temperatures, greater frequency of storms, floods, and wildfires. Coastal areas are endangered by rising sea levels. Glaciers and ice caps at the North and South Pole are melting. Politicians and our government sit on their hands.
A political system that caters only to the well-being of a small number of citizens – those that are affluent to being super rich – is not a democracy. We live in an oligarchy. This is not an oligarchy of the exceptionally knowledgeable and insightful. It is not an oligarchy of men and women dedicated to public service. It is an oligarchy of capitalists who will do anything to get richer than they already are, never mind how their enriching themselves will make the lives of other Americans more difficult.
So much for democracy in America.
Posted by richard_schmitt@charter.net at 10:37 AM No comments: 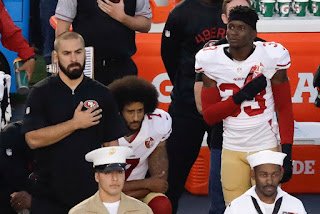 The owners in the National Football League have come up with a 'compromise' between the pressures from the President and other conservatives and the free-speech rights of their players. There will be no more demonstrations during the national anthem before games, but players who do not want to stand for the national anthem can remain in the clubhouse until the game actually begins.
The players who would have been kneeling during the national anthem in order to protest police brutality against young black men and women are not satisfied with this new rule. They have protested that they are as patriotic as the owners (or the President). They feel that their love of their country is being impugned and they are defending themselves.

But what is this "love of country"?

This is an apt time to raise that question. We talk a lot about patriotism on Memorial Day.

It is one of the national holidays where it is traditional for us to tell outrageous lies about who we are and how we live our lives. Having just passed that milestone, it is now time to look at the truth.

It seems as if protesting current police practices and protesting economic inequalities which leave black Americans disproportionately poor, in poor health and in prison is perceived as unpatriotic by conservatives. When they love their country, they love the country as it is replete with injustices, with unimaginable wealth for some and serious deprivations for others.

The protesters, on the other hand, are deeply troubled by prevailing injustices. They cannot love the country as it is. They do not love the actual country. They love the possibilities of change, of re-distributing opportunities, of opening possibilities to those who now have little to look forward to. They love the many Americans – well-known leaders like Dr. Martin Luther King or Rosa Parks and ordinary citizens whose names we do not know – who take our promise to ourselves of freedom and equality sufficiently seriously to resist injustices where they see them, doggedly refusing to be treated as less worthy of respect than the rich and famous such as the owners of football teams.

In the clash over protests before football games two different versions of patriotism confront each other. Love of country as acceptance of all our failings, of all the ways in which we fall so very short of the brave and shining pronouncements about American democracy, and love of country as love of our ideals and commitment to struggling to approximate them more closely than we are doing today.

The conservative patriot loves America as she is today including its pervasive racism, including the second-rate status of women, including its commitment to redistribute resources from the poor to the rich – as in the most recent tax reform law. The largely unpunished murders of black people by police contravene the "rule of law" which we are so proud of but honor more by violating than by practicing it. But conservatives accept that too.

The conservative patriotism of the owners in the National Football League is self-serving. America, as she is, has made them very rich.

The love of country of the players protesting injustice,  is the only patriotism that is morally defensible—protesting injustices particularly against young Black whose life is in constant danger and for whom it is very difficult to get a good education and profitable employment legally. By banishing that patriotism to the clubhouse, out of sight, the owners manifest that what they love is being rich not any of the ideals of their country.

The so-called compromise over political protest before football games is truly shameful.
Posted by richard_schmitt@charter.net at 12:51 PM No comments: