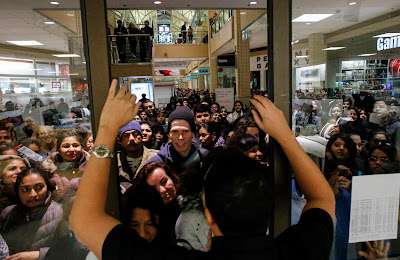 
I have always had a special fondness for Thanksgiving. Coming to the United States from Europe, barely a year after the end of World War II, life here seemed blessed and free. The policeman in the street had absolutely no interest in me or my papers. I did not have to show my identity papers to anyone; people did not carry identity papers.

Providing food involved no more than going to the A&P down the street. It was not a major effort that took up most of any day. I was very thankful for this liberation and celebrated Thanksgiving wholeheartedly.

That was almost 75 years ago. The world has changed a great deal since then. Some of the most ominous changes have not come to an end. The same processes continue and do not bode well for the future.

Thanksgiving today is a celebration deeply embedded in a commercial environment. Retailers have invented Black Friday, a frenzied grabbing for "bargains" which more and more appear to be often deceptive, a covert technique for unloading undesirable merchandise on people too tired or too ramped up to notice. Thanksgiving has become the prologue to a major fleecing of the public by big box stores. More recently this sorry event has been extended over the weekend to the next Monday.

"If people want to join that frenzy" you say, "they should be free to do so." That is of course true but  Black Friday and everything connected to it shows us how commercial interests will shamelessly take a gentle and lovely family celebration and turn it instead into something quite different, robbing it of much of what made it so valuable. Our traditions count for nothing. Making loads of money is all that matters. And as ordinary Americans, we have no say and really no recourse to restore our older culture.

If you don't believe this watch for the next five or six weeks. Did you notice that Christmas has changed from what it was when you were a child? If not, watch what is about to happen.

It is not pretty.

Ask your grandparents what Christmas was like when they were children. For myself, as a child in Germany, the during the Great Depression, there were presents but they were very practical and they were homemade. My mother would knit me a pair of new socks and that was pretty much it.

Compare it to today!

Thanksgiving also presents us an illustration of the utter ruthlessness of our commercial culture. Many Americans will cheer on their favorite football teams during the afternoon. (Perhaps that will be a way of avoiding embarrassing disagreements about Pres. Trump and his stewardship of the presidency.)

But credible evidence has emerged in the last few years that playing football is very bad for the players and that a certain number of them end up with serious brain injury. So far the teams and, more importantly, their owners have downplayed this evidence. The fans might not like it if the violence on the field were reduced and that would revenue. And so, once again, it's money that talks loudest and the health and well-being of exceptional athletes counts for less.

Not the same, is it?

Our commercial culture is transforming our traditions. America is changing even as we live in it. We need to open our eyes to see the changes and protest them if they are not acceptable.

Posted by richard_schmitt@charter.net at 11:29 AM No comments: